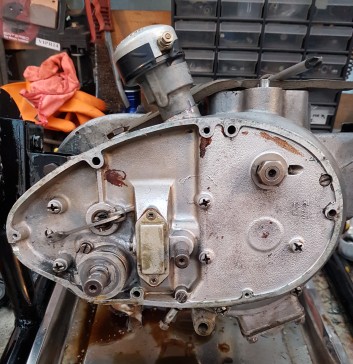 The outer timing side cover is a doddle on the B40, because that’s all it is, a cover. Beware though, on some of the BSA’s (and Triumphs I think) when you remove it, the whole kickstart assembly goes Boing! powered by the rather forceful spring.

The big nut is on the end of the camshaft and, despite it’s size and impressive appearance, is only there to control end play and disappeared on the later models.

There’s a goodly selection of screws in the inner case. The only one that causes a real issue is the one on the kickstart spring, which has a little steel reinforcement piece on the other side, which will drop off and try to hide under the bench. 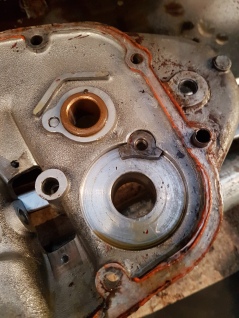 Once the inner timing case is off, it all looks a bit scary…

The guts of the gearbox should actually come out with the inner timing case (it certainly goes in that way) but mine didn’t, so I just pulled it out and stuck it in the obligatory takeaway box. Don’t forget the little spring bolted to the back of the casing 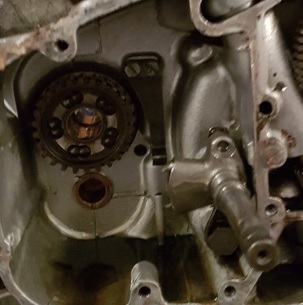 the camshaft and the cam followers seemed like a sensible next stop, followed by the distributor drive, which needed gently tapping out with a brass drift. All pretty easy going really, but lots of pictures will help it go back together.

Then the nut on the end of the crankshaft and the drive gears for the oil pump and distributor.

And you’re down to the crankshaft!

Remember to remove all the nuts holding the crank case halves together OK, I know you’re not stupid, but one reader might be. Let’s face it, if he/she’s relying on my blog for intructions…

Anyway, I used a nice store bought crankshaft pusher/puller. Essentially it’s a big bit of plate that bolts onto the alternator mounts, with a top hat thingy through the middle and a big bolt to push down on the crack shaft end.

That pops the primary side case straight off, the crankshaft comes out of the timing side bush pretty easily

all you’re left with is the timing side case in the stand.

Now to start the real work…