As I mentioned earlier, one of the first jobs I need to do is to figure out whether a rebore is required and, if so, by how much.
Getting hold of SS90 pistons can be an exercise fraught with danger and frustration, so the sooner I can start the process the better.

The easiest place to start is with the piston. The standard B40 piston is 79mm in diameter. This is odd on an imperial bike, but it’s what BSA quoted, because the capacity is cubic centimeters. It’s even odder when you’re looking for an oversize one, which will be quoted as 79mm plus the overbore in thousands of an inch e.g. 79mm +20thou (0.020”).
Only on British machinery does one find this type of eccentricity.
Fortunately I’m of that peculiar age that grew up as we converted from one system to t’other, so I’m largely ambidextrous when it comes to measurements.

However, I digress. The standard piston is 79mm (just in case you’ve forgotten) so if I measure mine it will give me the first clue as to whether its been rebored before.

Getting to the barrel itself, the first task is to remove many years of grime. My preferred method with cast iron is fairly brutal, but effective. Boil it in caustic soda. Hence the traditional Glaswegian insult of “G’away an boil yer barrel, Pal”
I guess I need to put the health warnings in here. Big gloves and eye protection are definitely the order of the day (and I’m not just writing that to stop people suing me, it’s really very nasty stuff) and for goodness sake don’t put anything aluminium in it, or it’ll dissolve before your very eyes. Oh yes, don’t use an ally pan either!

Before you actually start the thing simmering, you also need to figure out how you’re going to protect it afterwards. Hot cast iron flash rusts at an unbelievable rate, so you need everything ready for when you rinse it off.
I left my BSA soup simmering for about an hour or so and must give massive credit to my long suffering girlfriend who, when I told her I was setting up the camping stove in the yard, told me to do it in the nice warm kitchen instead.
You’ll notice that I left a couple of studs in it, purely to make it easier to handle.

Once you reckon it’s done, you need to rinse it off with boiling water. Cold water will remove the caustic, but it’ll leave the barrel wet. Boiling water on a hot barrel will evaporate virtually instantly.

My choice of protection is a couple of coats of Granvilles cylinder black for the fins and a wipe over with WD40 for the bore and the gasket faces.

And here’s the proof, the thing actually rusted faster than I could paint it!

At this stage I just carried on painting. To be honest it’ll probably be fine like that, but I’ll have a look when I get around to using it.

So, we now have a clean barrel.
Check one is purely visual.

Reasons to be rebored 1…2..3.. (Ah, Ian Dury, one of the finest!)
If the barrel is significantly scored (especially grooves cut by a loose gudgeon pin or circlip)
If it’s significantly rusty i.e. more than will wipe off without effecting the finish.
If it has a ring around the top, where the rings come up to, that you can feel with a fingernail.

Mine failed on the last one, as you can see below.

A colour change at that point is quite common and may not be a problem. If you think about it above the line is effectively combustion chamber, so it will have been in a very different environment. But if you can actually feel the ridge with the end of your fingernail, it needs sorting.

If it hadn’t already failed at this point I’d have gone on to measure it up for wear, taper and ovality. As it had, I still needed to, to establish just how much of a rebore it needed.

Unless you have a very large lathe and a dial indicator, the only way I know of to measure a bore is with a bore gauge.

Actually that’s already not true because, strictly speaking (and I’m sure there are many of you out there just as sick and pedantic as I am) a gauge cannot measure anything.
A meter can measure, i.e. give an absolute figure. A gauge can only give a relative measurement. So, for example, a vernier gauge can tell you how far its tip is deflected, but not where it was in the first place. So if you take a vernier gauge and then stick an anvil a known and precise distance from it, you now have a micrometer!

The upshot of this is that one must first calibrate the bore gauge against a known value and, given that it only has a range of 5mm, it has to be something pretty close to the bore size.
Some people use the piston size, I set it against a micrometer set at 80mm, which is about the maximum bore I could expect. It’s done by simply plonking it in the micrometer and setting the gauge to zero. 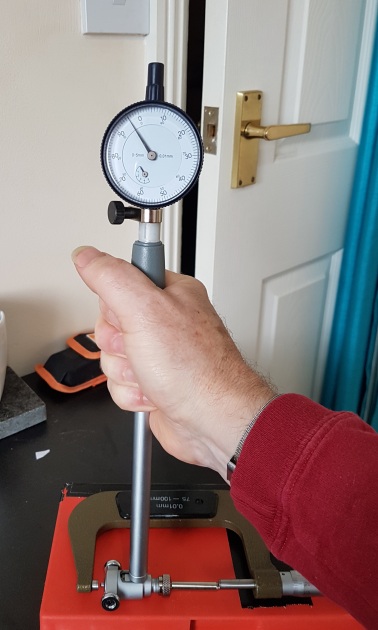 Incidentally, you will never, ever (even if you’re sober) be able to hold a bore gauge normal to the bore well enough to get an accurate reading from it. It will tilt one way or the other, or both.
The answer to that problem is really simple, once you know it.
At any angle other than perfectly normal the distance covered by the gauge will be greater than the true diameter. Therefore, if you rock the gauge slightly from side to side, the reading at which the needle reverses must be the right one. It’s easier than it sounds.
Oh yes, and the readings are backwards. If the plunger on the gauge is pushed in by 1mm, that means that the bore is 1mm less than the reference, so the gauge reading needs to be subtracted from the reference to get a true diameter.

So having set the gauge, we then stuff it down the barrel.

Alas, when dealing in microns, the barrel is quite a large area of real estate. So you may well ask where exactly in the barrel do you stuff it.
The answer is pretty much all over the shop. Actually, we take readings front to back and side to side at the top, in the middle and at the bottom.
I stuck together a quick spreadsheet (don’t you just love a nice spreadsheet) that I could plug the readings into and get the maximum and minimum piston clearances, the maximum taper and the maximum ovality out of. Any of these can be cause for a rebore, if they’re too far out.

Here are my results

The key figures here are the max and min piston clearances. You can see that they’re almost exactly twice the allowed tolerance, so it’s worn.
However, that 6 thou is only 3 thou over, which means that a first oversize of 20 thou will be more than enough.

Ergo, I need a plus 20 piston and a rebore to match it. Now all I have to do is find one, which is a whole nother story.