It was strange to realise that after some forty years of motorcycling (Ouch! Can I really be that old?) I had never changed a tyre.
The front was a pretty new Conti, but the rear was definitely due for replacement. A quick search on the web showed a massive price range, with something called a CST/Maxxis coming out cheapest. In my blissful ignorance I assumed that CST was the manufacturer and Maxxis the “model”, so I did a quick web search to see what I could find. The results were fascinating.

“RANT ALERT”
Every time I looked up CST I found posts saying things like “ I wouldn’t trust cheap Chinese tyres, they’re all made of monkey poo/cheese/inferior plastics etc. “ then when I looked up Maxxis I found lots of posts saying “they work great on my Hyabusa”, “I prefer them to the Bridgestomes I used to run” and similar positive comments. It seems they do wear a bit quicker than more expensive tyres, but that’s not too much of an issue with a GN. Then I finally found one post, from someone who works for Maxxis, which pointed out that “CST and Maxxis are the same tyres, they just changed the name for the American market!”
I had the same thing when I looked up the big bore kit. Lots of posts saying “I wouldn’t trust cheap Chinese crap” and then three from people who’d actually fitted them and said that they’d had many trouble free miles and were perfectly happy. The point is that virtually all the negative posts I see about Chinese kit (and they are far and away in the majority) are from people who’ve never tried the products. Is this a form of technical racism? I have had a couple of really nasty Chinese barbeques and I have an extremely good Chinese studio microphone, which became my firm favourite over many at anything up to ten times the price.
I would simply say that if you’re going to slag something off, do it from a position of knowledge, or you may just look a bit like a right plonker.
As final comment on the matter, I have now put 5500 miles on said Maxxis tyre, find it very nice to ride on, the only grip problem I’ve ever had was when it was completely unloaded under heavy braking (alas, the only tyres that work when airborne seem to be reserved for that young Marquez gentleman) and it’s hardly worn at all.
I certainly wouldn’t describe myself as particularly timid rider, yes, I have the usual 15mm chicken strips, but I do actually use the tyres with reasonable abandon.
In short, I rate it as a really good tyre.  I confess that it would take a lot to get me away from Bridgestone on the ST1100, but that’s a wholly different application and puts down five times the power.
“RANT OVER”
So, back to the plot. The first thing to do was the inevitable internet search for you tubes on changing tyres. I was quite disappointed for a while. The first ones I found said “start off like this…” then cut to a point just after the really difficult bit and continued. Another one was billed as “How to change a motorcycle tyre” but started with the guy saying that he’d never done it before and went on to show him wrestling with the thing on the lawn for a few minutes before cutting to “and I finally got the thing off”. Patience was eventually rewarded and I found one youtube which told me the bit that I needed to know.
I can’t find the tube again now, but the crux of the matter is where to put the second tyre lever and the trick is to place it where the bead of the tyre is just below the rim, about three inches from the first one. Any nearer to the first one and it doesn’t do much, any further away and it’s too hard to pull over. It’s a simple thing, but a real pain if you don’t know it. 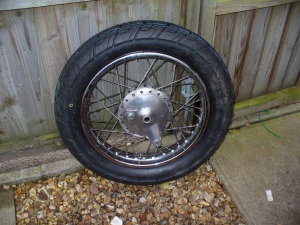 So, with the wheel reasonably well cleaned (I confess that I didn’t have the patience to do a fantastic job on all the spokes) and the new tyre on it was looking pretty reasonable, at least from twenty feet away, and it was time to reassemble the bike… 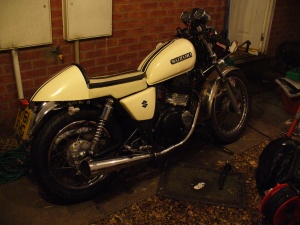