What-Ho, readers old and new. Well, the clue is in the title really. Speaking of which, my apologies to people suffering from Bells Palsy and Rowan Atkinson impersonators. Or Rowan Atkinson, I suppose.
Anyway, I’m back, with a new project.  Actually there have been a few in between.  There was the  SV650/Minitwin  track day bike, that convinced me I would never be a racer.  There was starting out in trials, which convinced me just how unfit I am, then the switch to the much more serene and safe world of pre ’65 trials (on a lovely little Cub) and the consequent shoulder injury that I’m still recovering from six months later.  Not to mention the road bikes of course. So I won’t.

However, to the point.  I recently became the proud owner of a 1962 BSA B40 (350 single, basically an over inflated C15) in running order, with a week and a half’s MOT left on it and, slightly bizarrely, a 1964 age related registration, despite what look like matching frame and engine numbers.
I say running order, it did actually run and handle, quite nicely.  The brakes were a bit scary (or have I just got used to modern ones) and when I stopped half way home it did produce a sizeable cloud of smoke/oil mist.  But I’m pretty sure that was just because the cover for the hole to access the clutch cable was missing.
Any BSA historians out there may well have just thought “hang on, the ’62 B40 didn’t have a hole to access the clutch cable” and, in truth, neither did the C15 from which the outer timing cover that was fitted to it was nicked…    until somebody hacked one out of it.
To be fair that (though true) probably casts it in a bad light.  It’s actually a pretty good (if not pretty) little bike. 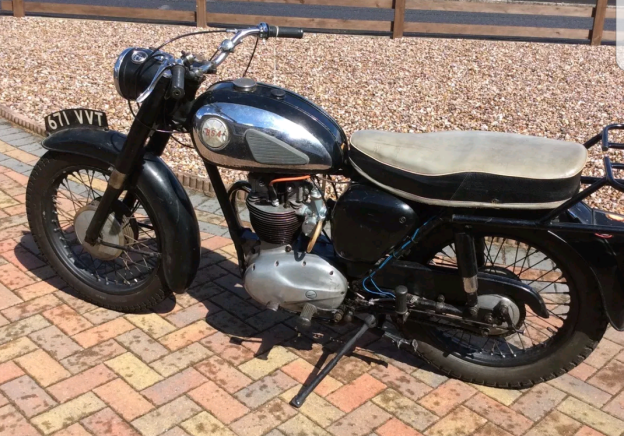 And I have plans for it!  As ever, some will hate them and some may even love them, but the process  (despite the feedback suggesting title changes such as “Boring old Pillock” (which doesn’t even alliterate) or “Bodging B*stard”  (with which it’s hard to argue) will be documented and explained here.
Having said that, I lay no claim to knowledge, expertise, skill or wisdom in matters motorcycle, so take my scribblings as they stand and keep the salt handy.

For those who remember Little Suzi, my operating conditions have improved greatly.   I now have a  bigger tent!